Why not “north-north-west” and “was not visible from the docks of Vitylo”? As for the rest, which can be improved, why not “An expanse of six to seven miles of sea parted it from the land.

You can translate the compass direction from French to English, and some language permit that word by word (for cardinal direction).

You can refered to that beautiful Wikipedia article or watch this beautiful picture below : 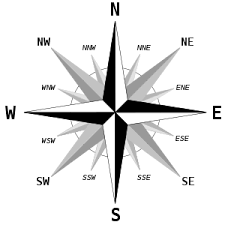 so nord-nord-ouest would be north-north-west

Your sentence could be translated as :

The ship, which raised closer against the pretty cool breeze from north-north-west, which could not be seen from the dock of Vitylo. This was separated of a distance of six to seven miles away.

The ship, which was hauling as close as possible into a brisk north-north-west breeze, could not be seen from the docks of Vitylo. A distance of six or seven miles separated them still.

Analyzing the possible sources of confusion: