Edit: I’ve thought about this more and realized that it’s not as complicated as it seemed.

The object pronouns for the imperative are mostly the same as the ones you usually use for verbs; moi and toi are the only exceptions.

Here are the object pronouns when used in the imperative: 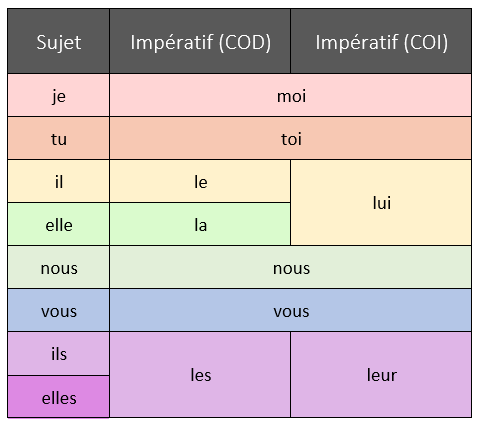 Here are some examples of the imperative pronouns in action:

Why would this be?

I find that these pronouns are best viewed as separate systems with a lot of overlap. When comparing that chart with this one, you’ll see that all the pronouns cross rows (used for multiple persons) and columns (used in multiple scenarios). There’s no hard-and-fast rule to predict which form a pronoun will take anywhere; you just have to know these charts.

But there’s a colloquial version where you can put it after, and here it becomes the "strong" version:

So the theory works — but hang on, which system is it that gives us the "strong" version?

In any case, you can see my point: somewhere it becomes hard to explain why this or that system is used in a specific scenario,1 and you more or less have to just view it as a chart to memorize. That’s why I made the hopefully handy ones above. 🙂

1 Without diving into historical linguistics to trace all the stages of each pronoun.

This is not about the verb, it’s about the pronouns. The first and second person object pronouns moi and toi have different forms when they are placed before the verb: me and te. Normally, for a direct complement (COD) or an indirect complement (COI) introduced by à, the pronoun form is me/te placed before the verb. But in an imperative sentence, the verb has to come first; this rule is stronger than the rule about pronoun placement. So the pronoun moves just after the verb, and there’s a hyphen between the verb and the pronoun as a sort of reminder that the pronoun is more closely attached to the verb than it normally is. Furthermore, the forms me and te cannot be used after a verb, so they change back to moi and toi.

The rule about the placement of the pronoun applies to all persons, not just first and second singular, but for other persons the form of the pronoun does not change. In particular, the third person forms are e.g. donne-lui and donne-leur even when they are feminine: lui does not change to elle in this case.

I think the simplest way to explain it is that the weak pronouns in general tend to have a different form depending on whether they come before or after the verb.

Here’s a chart (with the IPA transcription to show some phenomenons the orthography hides) showing the change in pronouns depending on their placement relative to the verbal stem: 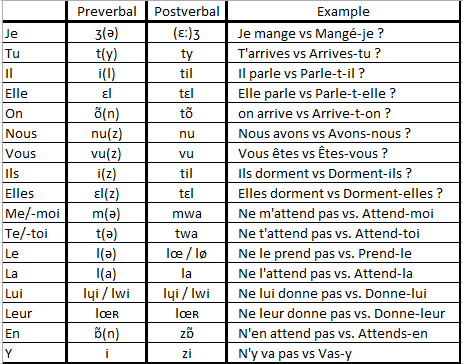 What I hope this indigest chart makes clear is that almost every weak pronoun behaves or is pronounced differently depending on whether it appears before or after the verb, except lui and leur. But for most of them, French’s orthography camouflages it, often by marking the change on the verb instead (Mangé-je, Vas-y).

There’s a few exception to this principle, mostly in that in the formal language the combination of post verbal me/te and y/en gives -m’en/-t’en/-m’y/-t’y (i.e. the preverbal forms), but quite conveniently Colloquial French regularises them away to moi-z-en, toi-z-y and so on.